The History of our Parish 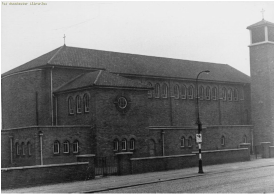 "The only property belonging to the parish is a willing young priest, full of energy and hope but empty of purse".  Fr Charles Wilkin wrote these words in an appeal for funds shortly after his arrival in Didsbury on 6th October 1928. A week earlier he had received a letter telling him that Bishop Thomas Henshaw had appointed him Parish Priest of the new parish of Didsbury, dedicated to St Catherine of Siena. Yet there was no church, no school, no hall, no priest's house and none of the necessities for holding church services. However, the first Masses in the parish were said the following day, in a rented room at the Liberal Club, Barlow Moor Road, at 9.30am and 11am.

The first priority was to build a Hall for the parish and on February 16th 1929 Bishop Henshaw laid the foundation stone. It was designed to seat 400 and budgeted to cost £2,600. Work was completed in record time and on June 9th 1929 the Hall was used to celebrate mass for the first time, at 8am, 9am and 11am.

The next requirement was to build a school - and initially the former Club House and Pavilion in the grounds of Didsbury Lodge were used for this purpose. St Catherine's Primary School duly opened on August 26th 1929, with 84 children on the Roll.  Plans for a new school building were finally approved in April 1936 and the new building was opened in April 1937. With a temporary closure as children were evacuated at the start of World War II, school reopened in April 1940.

By 1953 the parish was at last free of debt and started raising money for their greatest wish - a proper church building. With plans approved, work began on the new church in mid 1956. Unfortunately Fr Wilkin was by this time ill and confined to bed and unable to lay the foundation stone. Therefore Bishop Beck performed the ceremony himself on October 13th 1956. The new church and presbytery took just over a year to complete.

On December 7th 1957 Fr Wilkin died and it was fitting that the first Mass in the newly consecrated Church on December 15th 1957 was for the repose of his soul.

The parish has continued to thrive since those early days and celebrated its 90th Anniversary in October 2018.
See also the booklet commemorates the laying of the foundation stone of the church.